Bobcats are common throughout the United States, but are rarely seen in cities and urban areas thanks to their aloof, reclusive nature. When they are spotted by humans, they are sometimes mistaken for normal house cats, although it should be noted that bobcats are actually two to three times larger than the average house cat, but smaller than a mountain lion. 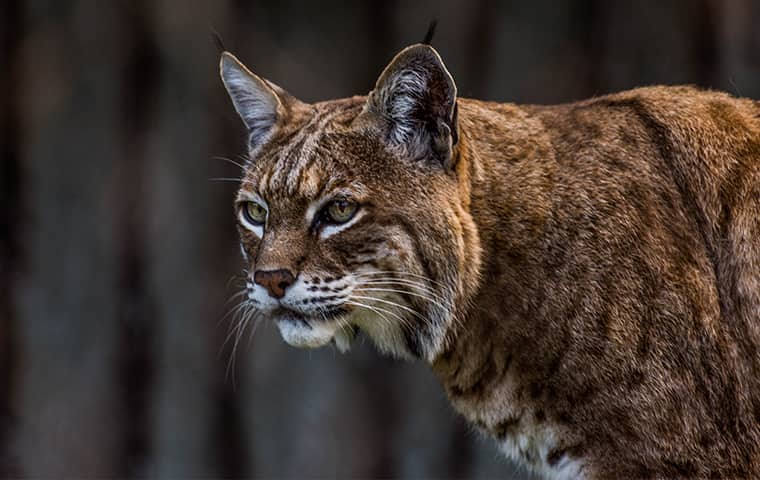 Like all felines, bobcats are predators and feed on a variety of other animals. Mice, rats, squirrels, chickens, birds, and rabbits all contribute, at least in part, to the bobcat’s diet. Although it’s unlikely, bobcats have been known to prey on domestic dogs and cats, especially in more rural areas where there is less human activity.

As is the case with any animal, bobcats play an important role in the ecosystem. Bobcats and other predators help to keep rodent populations down and rodent-borne diseases at bay. If these and other predators were eliminated from a given area, there would likely be large scale economic and public health repercussions as rodent populations begin to damage crops and vegetation, spreading diseases in the process. Likewise, predators like bobcats eat carrion, eliminating animal remains and vectors for disease.

Unlike bats, armadillos, and other small mammals, removing bobcats is a much more challenging process. For example, if the mother is trapped and removed to a different location, its young will likely be left alone to dehydrate and starve. Even if a pest control professional or homeowner may be able to capture the entire family at once, the kittens may be too young to be transported and released along with the mother, and will either be left alone or taken to a wildlife rehabilitation center, which is no substitute for the survival skills they would learn from their mother.

Additionally, it should be noted that bobcats are territorial animals, and relocating them to an unfamiliar area may provoke native animals to attack, obviously diminishing the chances of its relocation and survival. Like most cats, bobcats are fairly shy animals and persuading them to leave your property shouldn’t be too difficult. Still, there are a number of tactics which you can employ to make your yard less attractive to wandering bobcats. One such method is removing any excess vegetation or debris around your yard in order to cut down on the number of potential hiding places. Likewise, it’s a good idea to bring in any pet food or water that may normally be kept outside. Bobcats will use their excellent sense of smell to locate any nutrients they can find.

After our professionals have properly and thoroughly employed measures that will eliminate future wildlife infestation then the property owner may choose to have any wildlife in and around the property caught in humane traps. If bobcats or other pests have made unwanted appearances around your home or business, call Cantu Pest & Termite at (972) 562-9999 and schedule an appointment today with one of our friendly, experienced pest control experts.