Beavers are incredibly stubborn and tenacious animals, and have been known to consistently frustrate human efforts to remove their dams. They spend most of their time constructing or repairing their dams to ensure that they remain livable, so when humans remove or destroy them, the beavers’ instincts kick into high gear and the dams are immediately rebuilt. They are remarkable engineers and have the unique ability to modify their environment to suit their needs. As with many other constructive animals, they play an important role in preserving the balance of local ecosystems. 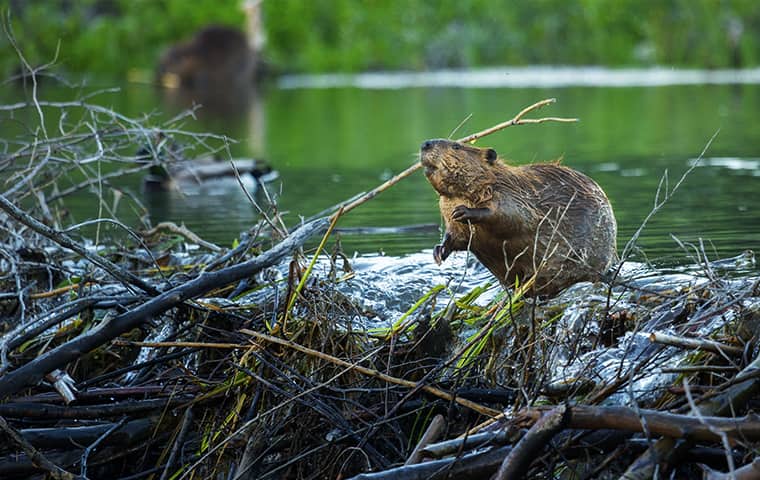 Beaver activity is fairly easy to spot in the wild. If the dam isn’t immediately obvious, you’ll likely be able to spot the distinctive work done to felled trees by their powerful incisors. Beavers help conserve and store water for dry times of year with their dams, and also help control flooding during the rainy season. When beavers live in close proximity to humans, however, they are often considered pests, and have been known to cause widespread damage with their dam-building activities. Beaver dams have the potential to flood crops, roads, pastures, especially when a given area experiences a sudden and unexpected downpour, and the water doesn’t have any clear route for drainage.

Beavers can be found in most wooded lakes and rivers in Texas, and can easily find their way into residential areas as long as the conditions are favorable. They tend to avoid arid areas, as year-round conditions do not lend themselves to beaver mating and breeding habits. When beavers begin making their homes a little too close to humans, it’s occasionally necessary to remove these animals, so as to avoid flooding and excessive damage to wooden structures.

Under normal circumstances, legal live-trapping and removal is a commonly used method for control. However, it’s important to note that this measure may only last for a season or two, before a new pair of beavers move into the same area and begin to mate and build dams. This is often a common occurrence, as beavers are driven from their homes by expanded housing developments encroaching on their habitats. Most of the time, these animals will drift farther downstream until they find a suitable location to build a new dam. A pair of beavers have the ability to dam a small river, start to finish, in about three or four days.

Cantu Pest & Termite cares about safe and humane trapping of the wildlife that has invaded your home or business. We believe that wildlife invaders do not have to be killed in order to solve the invasion. After our professionals have properly and thoroughly employed measures that will eliminate future wildlife infestation then the property owner may choose to have any wildlife in and around the property caught in humane traps.

If beavers or other pests have made unwanted appearances around your home, call Cantu Pest & Termite at (972) 562-9999 and schedule an appointment today with one of our friendly, experienced pest control experts.